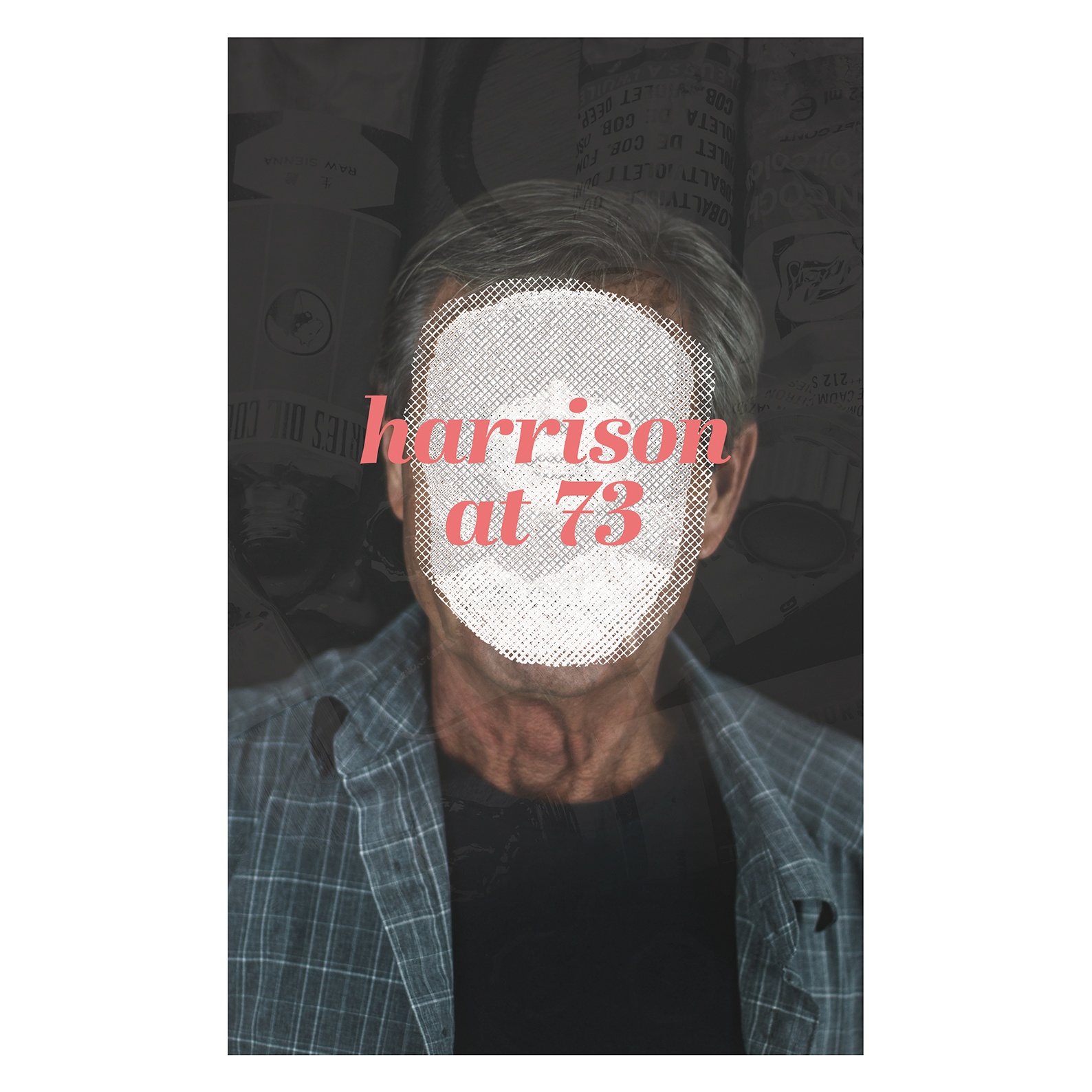 Harrison at 73 by Jake Troxell

The paper-covered walls of Margaret’s studio rustle with excitement as she enters. The works of art crinkle amongst themselves, dancing on their push-pin pendulums, wondering aloud if today is the day another Harrison will be joining their ranks. The portraits trace her movements inquisitively because that is the way she has drawn their eyes: filled with curiosity. Charcoal on newsprint. Ink on Bristol board. Pastel on mi-teintes. Gouache on vellum. Acrylic on unstretched canvas. Watercolor on paper. Twenty-eight sets of analogous eyes watch Margaret unroll a parcel of canvas atop her drafting table.

Harrison at 53, a pastel piece with fiery orange highlights, lets out a flap of disappointment. His wife never uses pastel on canvas and, for yet another year, he’ll remain the sole crayon Harrison.

The white-haired widow fumbles around in a cabinet filled with art supplies. Harrison at 59 and Harrison at 67 make paper wagers that she’ll choose acrylic again for her annual portrait. It has been her medium of choice for most of the Harrisons, though Harrison at 66 argues her charcoals are the best.

The other papers scoff when Harrison at 72 suggests she might go with oil paints this year. Harrison at 44 chuckles through his subtle charcoal crow’s feet; though he is the youngest by title and appearance, he has been with his wife longest and knows her best. He has hung on the wall since two weeks after his namesake’s passing. Harrison at 72 has only been around for a year and still has so much to learn about the magnificent woman he is married to.

Small things, like while she enjoys viewing the baroque brilliance of slow drying oil paintings, the stench of turpentine leaves her with a scratchy throat. She hasn’t used oil paints since a poorly ventilated weekend workshop in college which resulted in a hacking cough and a bout of bronchitis.

Harrison at 45, whose watery blotches and pale palette were rendered from the darkest depths of Margaret’s deepest despair, starts his usual depressive rumbling as she closes the cabinet door and sends a breeze his way. He throws himself from the wall, dislodging himself from his push pin prison, and reaches out for her. Harrison at 68 grabs frantically from below to catch his falling fraternal twin, but he slides right through his grip. Like the feather and the bowling ball, the push pin strikes the ground as the tortured portrait sails gracefully through the air. Harrison at 45 pleads for his love to cease her torture: burn her remembrances; strike out on the world and search out new love; find someone to hold her the way he wishes he still could; fill their empty home with laughter or abandon it altogether.

Margaret’s fingers close around the edges of the drifting sheet, and for a moment the paper bends in a way that 46 appears to smile up at her. She smooths the paper and tacks it back with the others. “Darker times,” she whispers with regret as they stand eye to eye.

She tapes the corners of the canvas down to the tilted drafting table and pulls over a cart filled with supplies: a roll of fine haired brushes, plastic palette tray, two mason jars, a rag, two palette knives, a shoe box filled with paint tubes, and a rusty metal can.

Margaret lets out a muffled cough as she untwists the cap of the turpentine tin and the solvent’s overpowering aroma fills the room. Harrison at 72 manages a smirking I told you so to the others as the twenty-eight pairs of curious eyes watch their wife squeeze paint from its tube onto the palette. She carefully spreads an underlayment of purples and reds with the knife building the rough, lumpy shape of a human head. Margaret is silent as she spreads her spirit across the canvas sheet. She does not look up for a reference in Harrison at 72 to see where her husband’s face had left off the previous year. Though she has not truly gazed upon it him decades, she still knows Harrison’s face so well.

She knows how life would have changed him. His shaggy hair began to thin in Harrison at 64 and by Harrison at 72 he was combing it over just like his Uncle Reed did. This year, she imagines the hair will have begun its transition to a shining white. Perhaps, he’ll become self-conscious and begin shaving it next year or not. It is really his decision. Still, his beard will retain its golden shimmer for some time.

She left the underlayment an especially deep purple on his right cheek. Decades of shirking his responsibility to protect his skin from the sun will have left him with an unfortunate patch of carcinoma that he’ll need to have taken off at the dermatologist. It will leave a small scar but stopping it early is what matters. She begins to apply a healthy layer of pinkish skin to the rest of his smirking face.

Still, Harrison’s spirits will be high. He will finally enjoy being fully retired. No more time-consuming part-time job at the lab. No more rehab for his slipped disc. No more weekend obligations now that he is leaving the boring Moose Lodge meetings. He is free to tinker about the house, read the paper, and go for long afternoon drives with Margaret.

Harrison at 70 cracks a joke about how much thicker and luxurious his own hair is but Harrison at 44, tortured by his wife’s unexpected choice of media, hushes the bald old kook.

Margaret’s touch is delicate as she adds highlights to the crook of his nose and peak of his brows, careful to compensate for how they’ve drooped and wrinkled with time. Over the hours the details pile up and build and mix and spread across the canvas until the white linen has been buried beneath a menagerie of colors and this year’s adventures, date nights, and everyday challenges. Still, with so many changes, his eyes are the same steely blue that she has always known.

The woman smiles down on the face of Harrison at 73 as his curious eyes open for the first time. He does not remember who he is or the identity of the woman tickling his face with a fine sable brush, but when she whispers, “Happy birthday, my love,” the picture grows clearer.

Margaret and Harrison, now both at 73, still make a handsome couple.